Evaporation is the passage from the liquid to the gaseous state that only impacts the surface of the liquid. On the other end, if boiling temperature (different for each specific liquid and pressure connected) is exceeded, the constancy of the temperature and pressure parameters let the boiling process happen. Both processes fall under the name of vaporization. 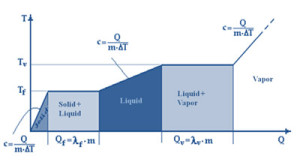 WHAT IS WATER LATENT HEAT?

To make the change of state, called evaporation latent heat, first heat (energy) needs to be provided. Quantity depends on the type of liquid and on its mass and temperature. For instance, the latent heat for one kilo of water at 373 K (100°C) is of about 2300kJ (550 kcal, 640 Wh) at atmospheric pressure (about 100 kPa). The same heat quantity is released by water during the vapor phase, when condensation phenomenon occurs.

WHAT IS THE BOILING POINT?

It is the temperature point where vapor pressure reaches the external pressure value (fixed), vaporization therefore occurs in a tumultuous way (boiling) that not only impacts the surface of the liquid, but its entire mass.

Boiling temperature point depends on the liquid type and varies according to pressure. Water boiling point occurs at 373 K (100°C) with an atmospheric pressure of about 100 kPa. But at high altitudes, on top of the mountains for instance, where pressure value is lower than the sea level, water boils with a lower temperature. When pressure is definitely low (vacuum) and equal to about 4 kPa (40 mbar), boiling temperature is reached at 302 K (29°C).